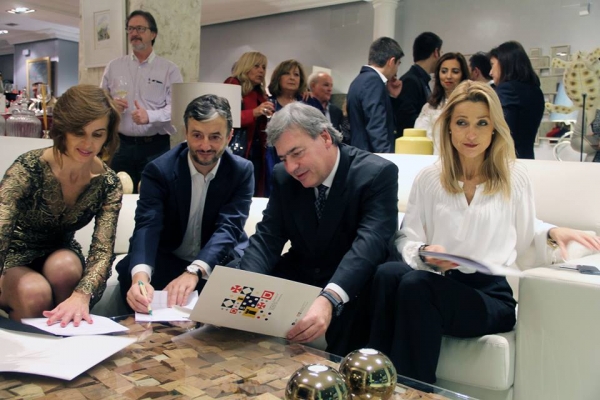 Company with the European Capital of Furniture brand in Zaragoza

It is the first foreign company authorized to represent the Capital Europeia do Móvel brand.
The Spanish businessman signed a contract, with several companies of Paços de Ferreira, to be the exclusive sales representative of manufactured furniture of our county in the city of Zaragoza, an initiative of the first national association of women entrepreneurs linked to the furniture sector, streamlined by Paços de Ferreira entrepreneurs who believe in business associations and are available to open "a new branch" in other countries.
The opening of the first shop abroad with the Capital Europeia do Móvel brand was attended by the host entrepreneur José Manuel Huerta and wife Helena Iranero , the President of Zaragoza Federation Trading Company, Jose Antonio Pueyo, the President and Vice-President and other members of the direction of LENP (Northern Portugal Entrepreneurs Leaders), an association of women entrepreneurs based in the Capital of Furniture, other Paços de Ferreira citizens' businessmen, as well as journalists and Spanish merchants.
This was another step in the claim of the Capital Europeia do Móvel brand internationalization made by the Executive led by Humberto Brito and that much is due to the strength of women entrepreneurs who believe they can place highly, on a global scale, the best of Paços de Ferreira furniture.
The moment of glamor left the Zaragoza market yielded to the beauty and quality of the best that is produced in Paços de Ferreira, being the dignity of the ceremony praised by those who attended it, from personalities from the political, to the social and the economic world of both countries.